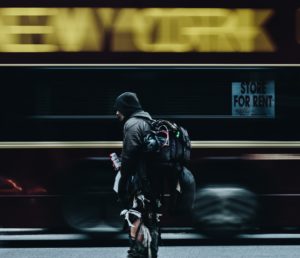 Homelessness is an experience that every New Yorker has shared- either you know someone who has been homeless, you have been homeless, or you have seen someone who is homeless on a sidewalk or in the subway. According to the coalition for the homeless, in recent years homelessness in New York City has reached the highest levels since the Great Depression of the 1930s. The number of homeless New Yorkers sleeping in shelters each night is 85 percent higher than it was ten years ago. In September 2015, over 60,000 homeless people sleep in NYC shelters each night. Out of those 60,000 people over 42,000 of them are children. With 8.5 million people in New York City one in every 143 New Yorkers is currently homeless.

While the number of homeless people in New York City has been growing, the reasons behind why these people have fallen on such hard times varies. Some homeless people were formerly in foster care and found themselves on the street as soon as they left the system. Other people fell on hard times after the recession while some are former criminals. Research has shown, however, that the primary cause of homelessness, specifically among families, is lack of affordable housing. Surveys conducted of homeless families have found that eviction, doubled-up or severely overcrowded housing, domestic violence, job loss, and hazardous housing conditions are the main instances that have caused families to be immediately homeless.

The number of homeless adults without families in New York City has also reached a significant number. Four out of five homeless people living on the streets of NYC are men. The majority of these homeless adults are living with mental illnesses or other severe health problems. Homelessness also disproportionately affects African-American and Latino New Yorkers; “approximately 57 percent of New York City homeless shelter residents are African-American, 31 percent are Latino, 8 percent are white, 1 percent are Asian-American, and 4 percent are of unknown race/ethnicity” (coalition for the homeless).

Homelessness is both a problem and a symptom of other problems. What can you do to fix the problem of homelessness and the problems that cause it?

Acknowledgement and Engagement: Homelessness brings about feelings of loneliness. A simple smile or kind word from a stranger walking by can brighten up a homeless person’s day. If you have time to engage with them, hear about their story or just chat for a few minutes that can mean the world to them. Most importantly, avoid stereotyping and stigmatizing the homeless!

Volunteer at a shelter: Shelters help out thousands of homeless people and families each day. Without volunteers, there would be no one to run the shelters and help those in need. Even if you can only dedicate one day a month to volunteering your time, any little bit helps!

Educate yourself: Reading this blog post is a great first step to better understanding the problem. One of the biggest problems with homelessness is misunderstanding the homeless. Learn about the different paths that lead people to live on the street or in shelters. Every person has a different story. No matter what brought them to this point, they are a valuable person who deserves help.

Donations: If you are financially able to you can donate goods such as blankets, hats, gloves, scarves, food, or toiletries. It is very likely that homeless people don’t have many resources and need all the help they can get to get simple necessities, especially during the winter.

Help out a charity: There are many charities in New York City that work to help homeless people. Here is a short list of some of them. Check out their websites to see how you can get involved.

Last year I had the opportunity to go undercover as a homeless person for a few days. I was able to better understand how people become homeless and what holds them back from being an active part of society and getting off the street. During my time I was able to hear many different people’s stories about their childhood and how they became homeless. From my experience, I was able to realized that the solutions listed above are just the beginning. Every little bit that you can help is necessary but there are also things that we can, and need to, do as a society to fix this problem. I learned that many homeless people can be helped with counseling, a place to sleep and a chance at having a job. Just because someone is homeless and jobless doesn’t mean that they don’t want a job and a chance at improving their life. This experience truly opened my eyes and made me realize that as a city we can work together to fix this problem and the problems that cause it. With everyone helping out and educating themselves on homelessness, we can get our fellow New Yorkers off of the street.